MOUNT DORA —
For the second year, the Lakeside Chamber Players will perform a salute to American artists including George Gershwin, Samuel Barber and Leonard Bernstein.

“Americana,” a one-hour concert, will begin at 3 p.m. Sunday, Aug. 10, in the dining room of the Lakeside Inn. The atmosphere will again be casual, cabaret-style, with the inn offering food and drink.

Baritone James Ziehr will perform the national anthem to open the concert and he will jump into the selections of Gershwin’s “Porgy and Bess,” on “Ol’ Man River.”

The other Gershwin pieces from the opera include “Overture,” “Catfish Row.” “Summertime,” “My Man’s Gone Now,” “I Got Plenty of Nuttin,” “I Loves you Porgy” and “There’s a Boat Leaving Soon for New York.”

“These pieces give me goosebumps because the melodies are so poignant,” said Janet Harris, the group’s founder and bassoonist.

Next in the program will be “Summer Music for Wind Quartet” by two-time Pulitzer-Prize winner Barber, one of the most celebrated composers of the 20th century.

“To me, this is like lovers at a summer picnic,” Harris said. “There are raindrops, a storm. It begins with the bassoon and the French horn on a hot humid day with a dreamy, lazy melody.”

The concert will end with Bernstein’s overture to “Candide,” one of his most-often-performed pieces. The overture includes tunes from “Candide”, “The Best of All Possible Worlds,” “Battle Music,” “Oh Happy We” and “Glitter and Be Gay,” whichTV host Dick Cavett used in his talk show.

“This is fun to play because it is cheerful, even joyous,” Harris said. “Technically, it’s difficult, but that makes it more fun. It shows off the sonority of the woodwind quartet.”

MOUNT DORA — Sunday’s concert in honor of Bastille Day — France’s Fourth of July — by the Lakeside Chamber Players will be quintessentially French, according to its founder, bassoonist Janet Harris.

“The atmosphere will be casual, the music presented in a cabaret style, and the program will be light, spirited, charming and very French,” Harris said.

Opening and closing with the French national anthem, “La Marseillaise,” the 3 p.m. July 13 concert in the Beauclaire Room of the Lakeside Inn will include “Trois Pieces Braves” by Jacques Ibert, “La Cheminee du Roi Rene” by Darius Milhaud and “Le Tombeau de Couperin” by Maurice Ravel.

Harris said the music played by the woodwind quintet may sound effortless, but the going will be tough.

The hourlong concert will have an intermission for the musicians.

“String players can play for hours, but woodwind players — and brass players — have only so much facial muscle endurance,” she said.

Milhaud, who was influenced by jazz he heard in Harlem in the early 1920s, counted Dave Brubeck and Burt Bacharach as students when he taught at Mills College in California.

His piece, popular with chamber groups, describes a day of amusements, including jugglers, jousting and a hunt, written in short movements that resemble miniature paintings.

The most difficult piece, that will follow the intermission, demonstrates Ravel’s complexity, and his attention to each detail.

The quintet includes Tina Burr on the flute, Charles McGee on the oboe, Jennifer Royals on the clarinet, Jennifer Miller on the French horn and Harris.

Wine and hors d’oeuvres will be available. People who donate $100 to the group will receive wine and food for free. 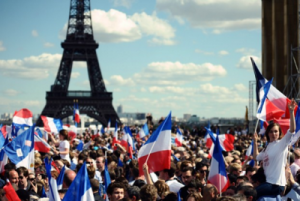